Steve called me a couple weeks ago wondering if I would be interested in trying to replicate a very special fish from another shaper. He mentioned that he has purchased a couple replacements from the original shaper and was not happy with either shape. He had also mentioned that he has been trying to get this shape replicated from a whole list of "fish" shapers up and down the Ca coast to no avail.

Sensing his frustration of not finding an able shaper to "get close" or find a decent "interpretation" of his said "Magic Fish" shape. After speaking to Steve at length and finding out that he has been surfing that same haunts as I have over the years I realized that he was very knowledgeable about shapes and what works for him. I then realized that there must be something unique about this shape that was not so easily shaped, my interest in his "Magic Fish" was piqued, I had to take a look at what this shape was about.
After analyzing the shape, there were many unique areas of the shape that would be difficult to reproduce from stock blanks available. I always begin analyzing a shape by the deck rocker as this is where the entire foundation of the shape begins. This is where most shapers would start by analyzing the bottom rocker first with out taking into consideration the deck rocker after the fact. Both top and bottom rockers need work to work in unison together, a shift of an 1/8" forward or backward will make or break a "magic shape". The top and bottom rockers need to be aligned precisely. All other elements are critical but I have found this is the most critical, rail foil, bottom, contours, etc,.. not as much.

With the unique nose rocker and the length at over 6'10" and +12" width from tip to tip / fish swallow no stock blanks were available. A custom rockered blank was in order so, I asked Steve we should add some style points since we have to custom order a blank. He decided on a triple stringer wedge-cut with 1/8" cedar. So a pre shape lay out was in order to get the tips of the swallows aligned precisely with wedge cut stringers. Thanks to Jeff Holtby and the guys at USBlanks they nailed the glue-up. With a wedge glue up being just a few degrees off on the angle cuts will sour any plans of your tips being in the precise location.
I hope I nailed the shape, fingers crossed. Proof is in the pudding, atleast that's what Steve told me.... We'll see. 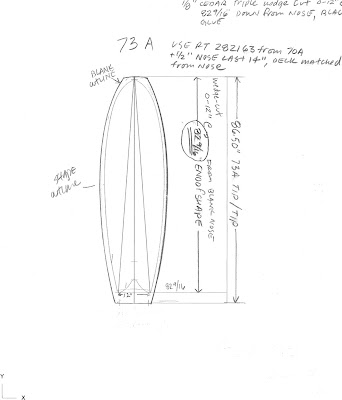